Eric arrived at Puckapunyal on June 8th 1940. He was assigned to the 2/2nd Pioneer Battalion, ‘D’ Company. Men who were previously assigned to the Light Horse, mainly from the North East of Victoria, showed a marked preference for D company, presumably so mates from the same region could stick together. 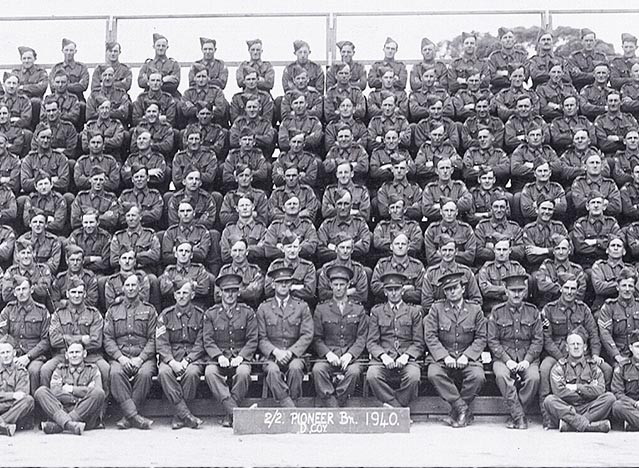 Pioneer Battalions were originally intended to construct roads, bridges etc for the Armed Forces in battle areas with the members also trained as soldiers for “emergency” fill in.

The reality was that there was always an emergency and the Pioneers performed both roles; often at the same time.

The concept of Pioneer Battalions had originally been explored by the Australians during World War I, when five such battalions were formed and utilised as support troops assigned at divisional level on the Western Front. Notionally organised along a traditional infantry structure, Pioneer Battalions consisted of a headquarters and four companies. D Company was commanded by Captain R. A. Camm, and consisted some 250 men.

The camp at Puckapunyal was tough and consisted of long marches between 75 to 140 miles and rigorous combat and arms training. Camaraderie among the men was strong as they often enjoyed sports days between different battalions. Concerts where also put on by soldiers every month while at Puckapunyal.

In early 1941 the Battalion moved to the camp at Balcombe Camp, Mt. Martha. Training included a beach defense exercise at Mt. Martha with full sound effects and another near Flinders, on the shores of Westernport Bay.

After 9 months of training the battalion was called up to assist in the Syrian/Lebanon campaign.

The British plan was to invade Syria and Lebanon in June, to prevent Nazi Germany from using the Vichy French controlled Syrian Republic and French Lebanon as bases for attacks on the Kingdom of Egypt.

The Vichy-French was the nominal Government now in control of all French colonies other than Northern France, which had been occupied by Nazi Germany.

The 2/2nd Pioneers traveled by train from Mornington to Sydney and left on the 9th of April on board The Queen Mary, which had been converted to a troop ship after the outbreak of war.