When enlisting for war many of the soldiers believed there fortunes would follow those of their Fathers before them, they would be shipped to Europe, train in Sainsberry plain in England, before spending months if not years in muddy trenches in Northern France. Few had guessed they would end up an Asia, and no one believed their whole unit would be captured at all once. Sadly, this is where the battalion found themselves, geographically, not that far from Australia, but with no hope of getting there until the war ended. 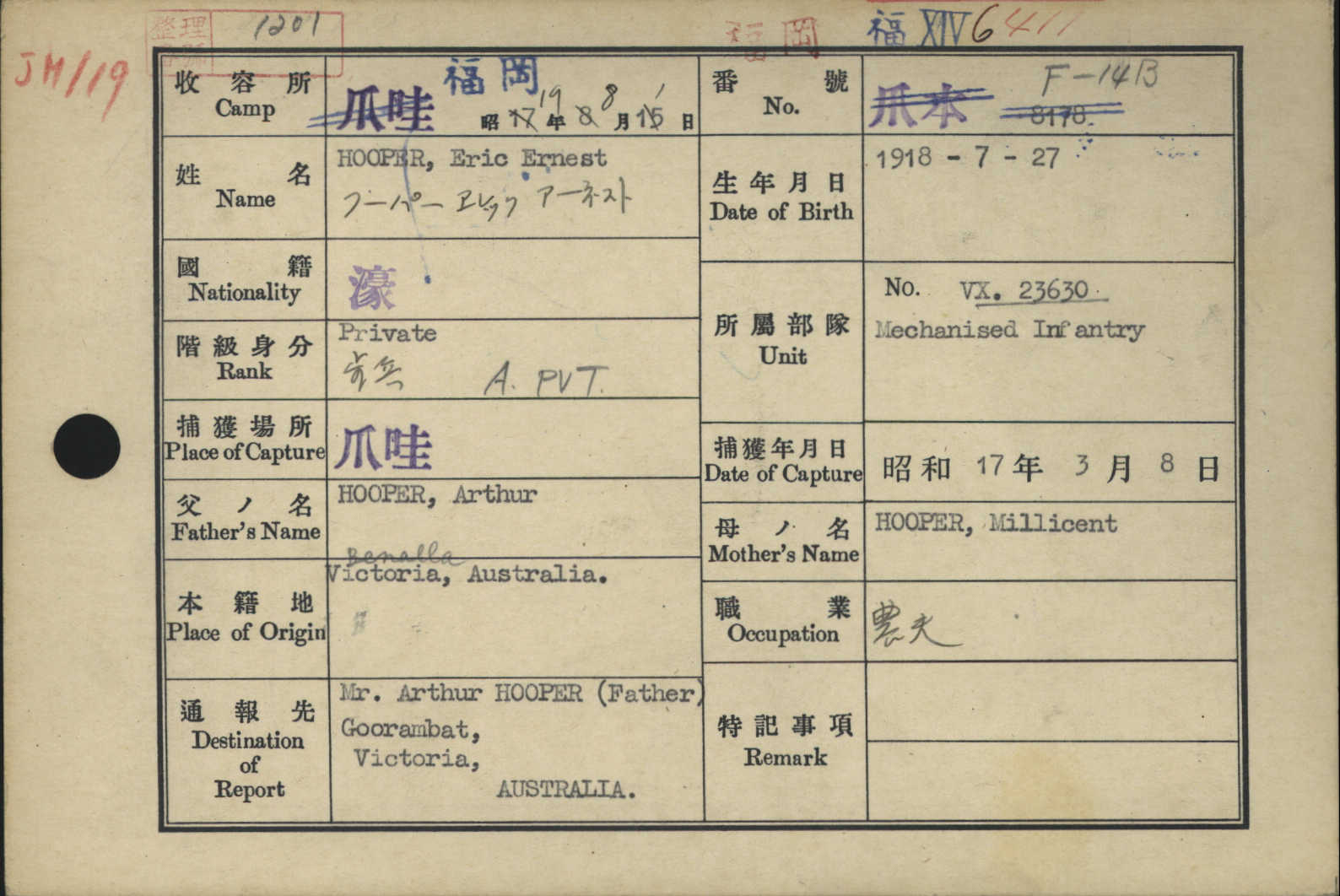 The Battalion surrounded on March 9th, and the next day proceeded to Arehnem Kampong where the battalions remaining arms, as well as themselves, was handed over to the Japanese. The Pioneers spent 4 days there at an old tea plantation. Initially it was difficult for the men to realise they were prisoners of war, and early on the Japanese allowed a measure of freedom to the men. Pre-conceived ideas of barbed wire fences and armed guards was yet to eventuate and the troops were free to visit shops and coffee houses in the village, and even to hire a horse and cart and visit nearby villages. Some men even made their way to the coast line to try and catch any boat they could back home, but none succeeded.

After 4 weeks the men were ordered to proceed to Batavia, and to their new home, a Dutch army barracks known as Bicycle camp. It was named this due to the large number of bicycles stored there. The troops would share the camp with fellow POW’s from America, Britain, Holland and other Australian units. At the beginning conditions at the camp were not bad, especially compared to other camps in the area that the crew of HMAS Perth had seen after their ship was sunk a few weeks before the surrender.

In July 1942, an order came down from the Japanese that all POW’s were to sign a declaration that they would not try to escape. Along with this order came the insistence that the men must not take any more classes or lectures while at the camp, not attend church services and no man was to go beyond the compound opposite their hut. Brig Blackburn insisted the men fight the order and for a few weeks refused to sign the document.

Eric and D company were in hut 5 with each hut holding around 300 men. The men were commanded by Brig Blackburn, who’s spirit, dignity and ability to stand up against Japanese injustices in the camp, earned him the admiration of all the men. The Japanese commander in charge of the camp was Lieut. Suzuki who ordered and oversaw the unprovoked bashings of many POW’s. In Eric’s prisoner of war declaration given after the war he mentions receiving a number of heavy beatings while at Bicycle camp, one of which fractured his ear drums. The beatings were given often for frivolous things such as not saluting the guards correctly. The other main commander of the camp Lieut. Kataguri was far more humane in his treatment of POW’s and organised literary competitions amongst the men and encouraged them to take lectures and classes during their time at the camp.

Work parties at places outside the camps started soon after the men joined the camp. This gave the men the ability to remove themselves from their cramped surrounds and see something of the outside world. All manner of tasks were completed by the POWs from filling ditches, sorting and packing motor parts and even tending the Batavia golf club. In May 1942, the true ruthlessness of their captors became clear as the Officers of the Battalion were taken away and tortured brutally for over a week, to try and find out information about the Allied war plans. No members of the battalion mentioned a word to the Japanese but paid the price for their stubbornness.

This impressed his troops but also the Japanese, who would lift the restrictions they placed on the troops if they signed the document, which they eventually did.

Eric’s first stint at Bicycle camp lasted to Jan 1943, after which he was moved to Makasura, a nearby prison camp before moving to Tandjong Priok in March. Tandjong Priok was a large camp broken into 8 sections, that provided labor to the near by docks. The rations received there were as follows:

Breakfast – A heaped pint mug of steamed rice. One teaspoon of sugar and a mug of tea.

Dinner – A heaped pint of rice, one pint of stew.

Tea – A heaped pint of rice, one pint of stew, a small rice cake or mashed sweet potato.

Whilst in Tandjong Priok the men worked in the docks unloading sugar, rice and other general work as required. There was always a shortage of food in the camp, so the men often helped themselves to sugar and salt, or took some back to camps, at their own risk of course. Life at Tandjong Priok was considered better than most camps on the island. Eric was then sent back to Bicycle camp for the remainder of 1943, before moving again to Makasura then to another Camp at Serang.

The camp at Serang, in North Java was especially tough and cramped with over 800 men, living in a cinema complex. The men slept on the stone floor and lived on a daily ration of a handful of rice and some bread, together with some water from a disused well. The men only had the most primitive sanitary and washing facilities. Eric was then moved to the ADEK camp.

The ADEK camp was built as a barracks initially to house Javanese contractors and their families who would stay there for a short while waiting to embark for Deli. The barracks were shared amongst POW’s and other civilian prisoners, some being women and children. The camp was extremely cramped with each man allotted only 50cm of bunk space. In May 1944 Eric had been sent there before being taken to Singapore on route to Nagasaki to work in the Mitsubishi ship yard. But after leaving Singapore disaster struck as Eric’s ship the Tamahoko Maru was sunk in the China sea.