Although she was stripped of her peace time paint, and some fittings, the Queen Mary retained many of her luxury accommodations but was certainly more crammed than usual for her month long voyage to Syria. The cabins were fitted with extra bunks and packed with kit bags which made movement very restricted. 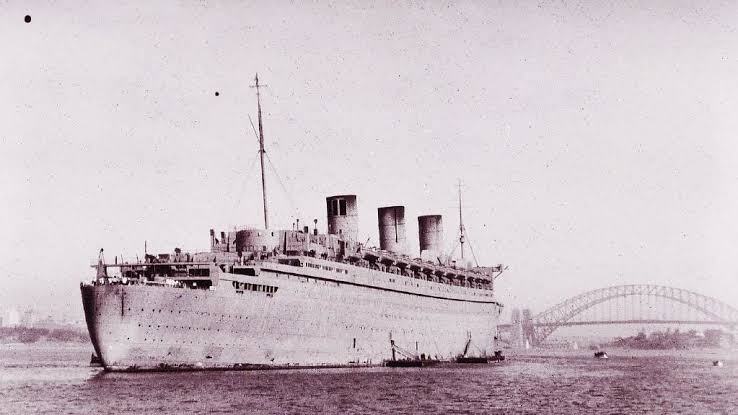 The trip to come would be long, unbearably hot at times with air conditioning only in the officers mess areas, and dangerous, with little to no protection against enemy aircraft.

With time on their hands the men maintained their fitness to ensure their readiness to fight on arrival in the theater of war, whilst nightly lectures where held on topical military interests.

At night the men drank beer, which sold at an excise free price, and enjoyed gambling, each night some several hundred pounds changed hands. The men also competed in tug of war contests, boxing tournaments and took full advantage of the on-board swimming pool.

On April 24th the ship crossed the equator, and the following day a ANZAC day service was held and led by members of the battalion who themselves where original ANZAC’s.

After reaching and refueling in Ceylon the Queen Mary crossed the Gulf of Arden at full speed, to avoid U Boat attacks, but was completely unprotected against aircraft attack. A box kite used to force attacking aircraft to fly high above the ship had malfunctioned, and through the voyage up to the Red Sea, the Queen Mary was un-escorted, a fact the troops were well aware of.

Despite the danger, on May 3rd The Queen Mary arrived at the Port of Suez, were 200 ships of varying nations had assembled and would of provided quite a sight for Eric and the men who had been at sea for almost a month. The troops transshipped on May 4th and sailed on the S.S Ethipoia for the trip up the Suez canal.

Throughout the canal signs of war greeted the men were large shell craters and half sunken ships littered throughout the water and shoreline.

The men finally landed on foreign soil in El Kantra where they were greeted entiusutcally by locals, before travelling by train on May 5th in the early hours of the morning. On first light the train passed Romani, a station made famous by the men of the First Light Horse Battalion in the first world war.

The train then ran through the sandy deserts of the Sanai region until the pleasent settlement of El Arish was reached. Eric and the men then reached Gaza, and what would be their new home for the next few months, the camp named, Hill 95.

Excerpts from this page were taken from the book “The Story of the 2/2nd Pioneer Battalion” by E.F. Aitken.